I have spent much of the last few weeks drafting and re-drafting a chapter for a forthcoming edited collection on Memory and Trauma in Mexican Visual Culture, a project I am co-editing with Miriam Haddu. My chapter considers three films released in 1976 that I contend are all haunted in different ways by the ghosts of 1968 that, in turn, is haunted by the iconography of the Revolution. The chapter is informed by writing on Mexican film, but also on archive and memory study work as a way of finding my way into understanding the use of archive material in the films. I compare Los de abajo by Servando González with two other films from 1976, Canoa and Los Poquianchis, both by Felipe Cazals 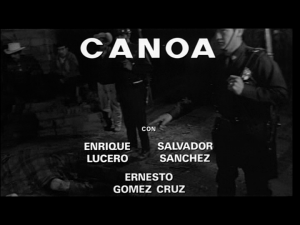 Soldier directing the camera in Canoa

I discovered González’s work when researching adaptations of novelas de la Revolución, that is, a large selection of books set during the Revolution. First published midway through the bellicose period of the Revolution in 1915 Los de abajo is generally counted as the first novela de la Revolución. González’s adaptation is the second, the first was in 1939 by the Golden Age filmmaker Chano Urueta. Perplexed by the fact that González’s name barely graced the literature in the field, I looked into his biography and discovered the clear reason why. He was employed by the government to film the student protests in 1968, for which he was shunned by many of his contemporaries. Thus, he had become implicated with the brutal repression and murder of students at a moment that continues to be an unresolved moment in Mexican history. As someone who has researched 1968 and its aftermath I had a visceral response to his decision to film the students, that can only be a fraction of what his compatriots must have felt. I understand their decision to ignore his work in favour of giving attention to others with whom they shared fellow feeling. But, his work and his decision continue to haunt me. I chose to venture in, a choice that is afforded me as an outsider.

In order to understand González’s work and to explore how to conceptualise it, I compare it to two films by Cazals, a director at the centre of a group of filmmakers, writers, and critics known as the Nuevo cine group, named after a short-lived, yet highly influential, film journal. They used journals, prizes, curated events, and colloquia and other public fora to publish, discuss, disseminate, and promote each others work and that of their predecessors. This group saw themselves as distinct to the studio system directors and wanted to foment a culture of auteurist filmmaking. Their writing continues to frame much of the discussion of Mexican film.

I look at extracts from Los de abajo, Canoa and Los Poquianchis where archival footage is used in the understanding that, as Dagmar Brunow expresses it, “The archive is not a space in which facts remain unchanged, but a process in which knowledge and facts are continuously recreated and transformed” (2015, 37). By extension, archival material is neither stable nor fixed and can be deployed for multiple ends. There is much work done on this in relation to photographic material, and a growing number on film. I also explore how these films use footage that carries the aura of what Jamie Baron calls “the archive effect” (2014). The material is deployed by Cazals and González as a means of exploring how the representation of violence on screen implicates the filmmaker in a system that has traces of perpetrator violence. They navigate this differently because of the historical events they portray and how their biographies are understood in relation to their work.

Something I don’t have space to explore in my chapter, but want to note here is that whilst I am carrying out an auteurist reading of both González and Cazals, it takes many to make a film. For my purposes, this is how both are framed and it is possible to trace such patterns in their work. However, I want to note, in particular, the collaboration between Cazals and Tomás Pérez Turrent, an academic, screenwriter, actor and director, who wrote Canoa. Los poquanchis was co-written with Xavier Robles, another notable screenwriter whose credits include an adaptation of an Albert Camus play as Bajo la metralla (Felipe Cazals, 1983) and the first fiction film about 1968, Rojo amanecer (Jorge Fons, 1989). In addition, there is an extra on the DVD version of Los de abajo where the actor, Eric del Castillo, who plays the protagonist, talks about how he workshopped the play (the novel was adapted for the stage several times) and he asserts that his input is integral to the film adaptation. This is an interesting assertion of creative control and complicates any auteurist reading of the film. It is possible to speculate on other motivations for this extra. It might be a way of encouraging those put off by González’s past to watch the film or for del Castillo to position himself as a serious actor rather than as a telenovela (soap opera) actor for which he is famous.