“This World is My Place”: Homies, Art Censorship, and Big Birthday Bashes

The subtitle to the Chicana/o Studies book I co-edited with Catherine Leen was taken from an eponymous poem by Bernadette García. In her poem, García asserts her right to write about those who are considered “Other” by her professor because, “[T]his exclusive space you’ve constructed around yourself and a select few is rapidly diminishing in size confined to the barriers of your ignorance”. 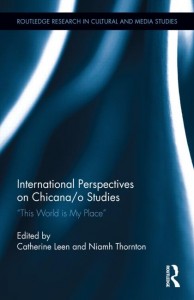 Our aim with the book was to share a sample of the ever-expanding range of research carried out from inside and outside of the US academy on Chicana/o Studies. Our contributors are in a variety of locales including Russia, Spain, Ireland, the UK, the US and Argentina and they write about location and space from these distinct perspectives. The chapters cover a range of topics including literary analysis; the study of the recent history of the book among women writers; ecocriticism and family memoir; recent detective fiction about the Juarez feminicides (femicides); an analysis of the history of Chicana/o studies in Russia; the quinceañera in film and literature; barbed wire border art; figurines of urban tribes; and controversial religious iconography in Chicana and Irish art. As well as the demand to be noticed, read about, seen and heard the chapters address questions of identity, memory, place and transcendence.

I want to share a sample of the images, ideas and sources of inspiration for the authors to whet your appetite and as both a sample of what the essays consider and a form of complementary hypertext. For my chapter on the quinceañera (also quince), the Latino equivalent of and antecedent to the super sweet sixteen (made infamous by the MTV series of the same name), I start with the children’s TV series, Dora the Explorer, consider the MTV phenomenon, take in some novels and films that build their narrative around the quince, and then focus my attentions on two primary texts: the film, Quinceañera, which was known as Echo Park, L.A. on its European release (Richard Glatzer and Wash Westmoreland, 2005) and  Julia Alvarez’s  Once Upon a Quinceañera: Coming of Age in the USA (2007).

Francisco A. Lomelí’s chapter considers the Homies. These are popular figurines that accompany a graphic novel, which play with as well as playing on the stereotypical representations of Latinos from the barrio. He provides an overview and explores the strengths and limitations of this act of re-appropriation. Click here, to see the range of Homies and as a supplement to what Lomelí has to say.

Catherine Leen compares how contemporary Irish and Mexican artists use religious iconography as a way of exploring the culturally specific meanings of these and the ways in which such images and icons can demonstrate shared cultural experiences. To get a sense of the range of recent artistic representations of the Virgen of Guadalupe that can be found in Chicana and Mexican art, click here. Leen discusses some of these, specifically art by Alma López, Ester Hernández and Yolanda López, as well as others by the Irish artists Rita Duffy and Constance Short. In her chapter, Leen also examines the various ways in which their art has been censored that can vary from the mild (with a nod to Fr Ted) to the aggressive.

If you want to join us in looking at some of the world outside that of the select few of the aforementioned fusty professor, the table of contents can be found here and it can be bought in many of the usual on- and off-line shopping outlets.