The Politics of Being a Writer in Mexico: Ayotzinapa

This poem has been circulating amongst my friends and followers on social media in the last day. It draws attention to the power of writing and the writer’s role as public intellectual in Mexico. Huerta’s intervention is an important tool in the building of transnational solidarity and a means of reaching a wide audience where news media often fail in reach and coverage. The act of solidarity by the translators, who are helping to disseminate this in multiple languages, is also important to note. The English language version was translated by Juana Adcock, herself a poet.

The events in Ayotzinapa are unfolding at such a scale that already there is a very full English language Wikipedia page with, to date, 147 footnotes referencing the many journalistic pieces from newspapers and press agencies in Spanish and English.  I don’t normally reference Wikipedia, but the size of this reflects the incremental scale and online organisation around the disappearance of these students. It has gained momentum and captured the country’s attention on a scale that has galvanised public opinion. There is a demand for change that is usefully synthesised in the title of a new Facebook group called, “ya me cansé, por eso propongo” [I’ve had enough, so I propose]. While being a positive assertion, the first person in this lacks the social solidarity of the “todos somos Ayotzinapa” [we are all Ayotzinapa] hashtag to be found on Twitter. 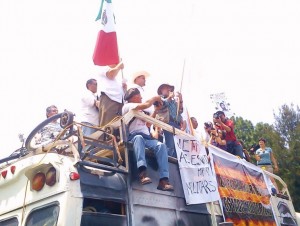 The growth of this collective movement is notable, but not without precedent. The marches and action around the death of the son of the poet, Javier Sicilia in 2011 drew considerable attention from Sicilia’s fellow writers, Mexican citizens from near and far, and famous actors, but has largely dissipated despite it being as yet unresolved. A timeline of events can be found here. Soon after the death of his son, Sicilia declared that he could no longer write and would dedicate his time to seeking justice. This is understandable and I could pass no judgement on that action when someone is faced with such a loss. Silence can have its own power. For some, it is a form of action that speaks for itself, and loss can silence creativity. Sicilia has not been completely silent. He has persisted in speaking, protesting, and demanding justice. His actions and the solidarity around it was, in many ways, a precursor to the present movement.

Another intervention by a writer in solidarity with Ayotzinapa is that of Elena Poniatowska. She is a Mexican writer of considerable range, who has long engaged in public acts of solidarity with social movements.  Repeatedly, she has documented major social and political upheavals (such as, the student massacre in 1968 and the events surrounding the earthquake in Mexico City in 1985) in her writing that often sits somewhere on the spectrum between fact and fiction. That is, some of her writing is easily categorisable as fact or fiction, much else is in-between.  She spoke at a march in Mexico City on the 26th of October 2014 demanding the return of the 43 students from Ayotzinapa who were disappeared. Her speech and a sense of the scale of the march can be seen here in Spanish and in English here.  The biography given on the English page emphasises her political writings:

“Elena Poniatowska is a Mexican writer and journalist. Her dozens of books  include fiction, nonfiction, poetry, children’s books, and journalistic essays,  one of the most famous of which is La noche de Tlatelolco (published in  English as Massacre in Mexico), a chronicle of the brutal repression by  the Mexican government of student protesters in 1968. Much of her work focuses  on politics, history, and social justice. In 2013 she was awarded the Premio  Cervantes, which is the greatest Spanish-language literature award for an  author’s lifetime works.”

This is detail that is most relevant to the speech, but does not completely capture the range of her output.

In her speech she names each student, a reminder of their individuality in itself, and provides a brief profile of each of them: one likes football, another is a joker, another likes gaming. She gives accounts of some of the students’ backgrounds, their parents’ aspirations for them, their physical appearances, and nicknames. This makes them more than the stark number 43 can suggest, and reveals her skills as an interviewer gained over years of journalism and testimonial writing.

Note the use of the present tense. It does not concede that they are dead, an important point for the families. They are disappeared.

There is an immediacy to the reactions by Huerta and Poniatowska that has its own dynamic and function. No doubt, over time other creative expressions will emerge when events have evolved further and writers have time to fully digest what has happened. In some ways, these creations are the literary equivalent of journalism: immediate, timely and necessary.