The lady with the tutti-frutti hat 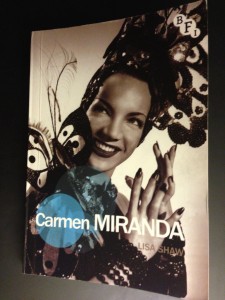 I recently reviewed the first three books in this series: Martin Shingler’s Star Studies: A Critical Guide, Ginette Vincendeau on Brigitte Bardot, Susan Smith on Elizabeth Taylor and Pam Cook’s Nicole Kidman. The review will appear in the Celebrity Studies journal. Shingler’s text is an overview of the field and serves as a fine introduction. He covers a considerable range of concepts related to star studies including: marketing, audience reception, celebrity, physicality and physical attractiveness, accent, the public/private divide, acting, voice, and how they function as auteurs, workers and entrepreneurs. It is done concisely, in an accessible fashion that is both learned and insightful. He uses examples from Hollywood and Bollywood to illustrate his discussion. The other three books are individual star studies which examine specific aspects or focus on key features of a star’s career and star text in under 200 pages.

Carmen Miranda is Lisa Shaw’s contribution to the series. As one of the leading scholars of Brazilian cinema she is well placed to consider Miranda. Shaw provides an overview of Miranda’s career from music halls to Brazilian cinema, her move to Hollywood to become the highest paid female star and then her decline up to her early death. Shaw’s approach is to focus on Miranda’s performance with its camp elements that both play to and challenge US concepts of Latinness; her use of code-switching (between Portuguese and English); her wardrobe, in particular the elaborate “tutti-frutti hats”; and her enduring appeal to a variety of audiences. Using examples of lyrics and describing key scenes in Miranda’s films with close textual analysis Shaw traces the development of her star text. As Shaw details, Miranda received mixed reception from Brazilian and US audiences. In particular, critics and the viewing public in Brazil were sensitive to how they were being presented via Miranda on the big screen. But, Shaw contends that “[v]ia her knowing glances and exaggerations, she allowed for alternative interpretations of performances by audience members who were also victims of type casting and condescension in their everyday lives, letting them in on her joke” (6). These alternative interpretations form part of Shaw’s own readings and are threaded throughout the book. Where chapters one and two look at Miranda’s stardom in Brazil and Hollywood, respectively,

chapter three considers her off-screen star appeal. That is, how her version of the baiana look has become instantly recognisable; how she commodified her star text through promotions, working with fashion designers to sell her look; and how her image has spilled over into a multiplicity of different media and products that have endured up to the present day.

This is a fascinating introduction to Miranda, that draws on Shaw’s expertise in Brazilian film and culture, as well as her own sensitivity to camp sensibilities that makes it a fun as well as informative read. As with the other star studies in this series it provides a very useful, insightful and learned introduction to an individual star, and should inspire others to read on and discover more about Miranda, as well as, hopefully, encouraging more people to take another look at Miranda’s film output.

If you are not familiar with Carmen Miranda, for a flavour of her performative style here’s a compilation (official) fanvid of her work set against one of her biggest hits “Chica Chica Boom Chic”.