:A recent art piece on the waterfront in Liverpool reminded me of the different possible approaches and modes of reflecting on a place and its inhabitants. This bird is a blue-legged Masked Booby who are primarily found on Clipperton, a small atoll in the Pacific Ocean. I have just finished editing a chapter on two novels Isla de pasión (1989) by the Colombian Laura Restrepo and Isla de bobos (2007) by the Mexican Ana García Bergua set on this atoll once occupied by Mexico where the birds are significant to the inhabitants. 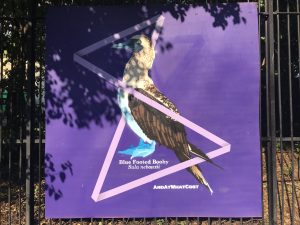 I am not a bird watcher, so recognizing such a distinctive breed was a novelty. Researching these novels required a multidisciplinary approach and meant drawing from theoretical approaches in literature, film, philosophy, sociology, anthropology and history. That these have more in common than differences is evident when I found myself making the shift to reading material from the sciences for this chapter (in Crime Scenes: Latin American Crime Fiction from the 1960s to the 2010s) to learn about Clipperton.

I found a very brief entry in the Oxford Concise Dictionary of World Place-Names that scarcely hints at the awful activities that took place in Clipperton. It is described as ‘[a]n island in the Pacific named after John Clipperton, an English mutineer and pirate, who used it as a base in 1705. It was annexed by France in 1855’ (Everett-Heath 2014, np). Clipperton was used as a landing post by the pirate because of its strategic location where he and his shipmates would stopover to avoid capture. Their smaller and sleeker vessels could traverse the tricky waters whilst the larger cargo vessels could not. In later centuries other nations (Great Britain, France, US, and Mexico) claimed the territory because of Clipperton’s strategic location.  As well as reading (more detailed) historical accounts, I had to turn to scientific research. The diver Michel Labrecque describes Clipperton as follows,

[t]hroughout the globe, many destinations can be described as unique or remote but only one deserves the title of the most isolated atoll in the world. Clipperton Atoll is located 870 miles (1400km) south of the tip of Mexico’s Baja peninsula. Far off in the Pacific Ocean, its latitude is equal to that of the northern portion of Costa Rica (Labrecque 2016, 44).

As described by Labrecque, Clipperton is still difficult to access, is occupied by millions of land crabs, surrounded by a healthy coral reef, nursery to Silvertip sharks, and home to unique fish species (the Clipperton Angelfish, Gregory and Grouper) (Labrecque 2016, 45-6). Although called an island, it is in fact “the only coral atoll in the eastern Pacific” (Charpy et al 2010, 771) and is ring-shaped surrounding a lagoon. An atoll is a circular coral reef and Clipperton is the result of volcanic activity and the residues and sedimentary deposits of organic matter from animal and plant life. The precise position is described as follows,

In sum, it is a desirable yet challenging location for human habitation because of its isolation and geophysical make-up.

While its location has been important, for a time its wildlife made it valuable and a significant reason for contested occupations. García Bergua calls her novel La isla de bobos after the Brown Boobies and blue-legged Masked Boobies, seabirds who proliferate on the island and as an evaluation of the human inhabitants of that island (bobo = foolish). The nitrogen-rich guano of these seabirds was an important source of fertilizer until the advent of artificial fertilizers.

Clipperton was occupied by Mexican forces in the opening decades of the Twentieth century, at the outbreak of the 1910 Revolution the army men, their wives and children and workers as well as the people attached to the guano trade were abandoned by their government during the political turmoil. A place with little vegetation and resources, distant from accessible sources of food other than the seabirds and crabs that proliferate, the inhabitants soon suffered extreme and, sometimes, deadly cases of scurvy and died. For a short time, I found myself investigating scurvy. Although it did not make it to the last draft, the fact that men more readily succumb to death or madness with scurvy was a piece of information that was both illuminating and signaled why so many died whilst the women survived and suggested why the surviving men inflicted terrible trauma and harms on the women and children.

Restrepo and García Bergua’s novels recount the individual crimes that took place: murder, theft, assault, rape, army desertion, and kidnap. They explore the motives of the perpetrators and the contexts in which they took place. It is clear that the crimes were serious and had significant and long-term consequences on the survivors. Neither condones the actions of the individuals who committed the acts, instead they foreground the challenges involved in ascribing individual blame and, what I describe in my chapter as the “hazardous everyday”. They get to a partial truth behind the salacious details that were reported in the press at the time.  Whilst told using different stylistic and generic conventions, Restrepo and García Bergua hold individuals responsible for their actions and call the state and society to account for rendering women, children, and people of colour as inferior to men of European origin. Neither condone nor naturalise this individual violence, instead they lay it bare and make systemic violence culpable for what took place on this remote atoll.

The seabird on the Liverpool waterfront is more than just an unusual species, it is one that has considerable resonance for those who understand the history of Clipperton.

This entry was posted in Mexican Literature and tagged Blue-legged masked booby, Clipperton. Bookmark the permalink.