The Latino* Family who are Latino: One Day at a Time

One Day at a Time (2017) is a multi-camera sitcom produced by Netflix. The original was released in 1975 and I don’t recall seeing it. The concise IMDB summary describes it as, “The misadventures of a divorced mother, her family, and their building superintendent in Indianapolis”. The present-day version shifts the action to Los Angeles (LA), the opening credits makes allusion to Echo Park, but some of the other shots, suggest at other places in LA. Given that the story is centred on a Cuban-American family, the LA location is significant, as Miami is a more usual location for such narratives given the size of the Cuban population in Florida. For the purposes of this series LA means that that family is a minority amongst mostly non-Cuban others and that the grandmother, Lydia (Rita Moreno), takes on the role of policing, encouraging, and nudging the family to keep up the traditions that she has inherited, invented, and moulded to her own liking. That Lydia is a mix of conservative upholder of the past and flexible adaptater to changing cultural values, sometimes resistant and at others dynamic, speaks to the strength of the scriptwriting as well as the performances in the series. 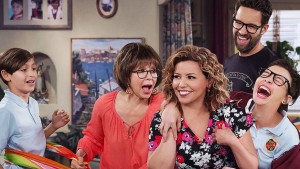 Like the 1970s version, the 2017 version is focused on a single mother, Penelope (Justina Machado), who is separated from her husband and finds herself living in a three-bedroom apartment with her mother and two children, Elena (Isabella Gomez) and Alex (Marcel Ruiz). Her mother has a small curtained-off area adjacent to the sitting room as her bedroom. This detail is a nod to the gentrification that has taken place in recent years in LA, which means that a sole earner cannot afford a bigger space. These changes have had particularly negative effects on the Latino community in areas such as Echo Park, that is also alluded to elsewhere, such as the 2006 film Quinceañera/Echo Park, LA (Glatzer and Westmoreland).

In common with Homa Khaleeli’s description of the central family in the series Black-ish as “not a family who “happen to be black” but a family who are black”, the Álvarez’s are a Latino family whose Latinidad is essential to who they are, and the series addresses issues that effect their everyday life. Being Cuban-American is not simply colourful detail, it is integral to their lived experience.

In this vein, bilingualism is dealt with in a deliberate and often self-conscious fashion. There are no subtitles in the series, which is also an interesting choice. Sometimes, the words are paraphrased or translated for a non-Spanish speaker, at others there is no translation, and on other occasions, there is deliberate mis-translation.

Evidence of the cultural and affective value of language is clear in the ways language usage is marked by place. The shift between work and home is marked by Penelope’s naming. At home, she is Lupe, whilst at work she is Penelope. These are because of how these spaces are ethnically and relationally marked, which is also reflected in the code-switching and language shifts that happen in and between these places. Penelope/Lupe’s mother speaks in Spanish and English to her and English, Spanglish, and Spanish to the children. The eldest daughter, Elena, about to turn 15, is proud of her ancestry, academically precocious, politically engaged, but refuses to learn Spanish, much to her grandmother’s disappointment. But, Lydia persists revealing that Elena has considerable passive knowledge of Spanish. Not speaking Spanish is not a marker of generational shifts, however. Alex, doted on by his grandmother, speaks Spanish fluently. Moreno’s own take on this is worth a look.

The series self-consciously plays with and challenges TV Latino stereotypes in ways that are clever and innovative. It also navigates an interesting line between experiences specific to Cubans in the US and those shared across race and ethnic backgrounds. Penelope is an army vet, who served as a nurse in Afghanistan and was injured in the line of duty. She now works in a small private practice alongside white co-workers. She finds friendships in an all-female army vet support group and is frustrated by the difficulties in getting physiotherapy for her injuries. The episodes are centred around family and societal issues, such as, Elena’s refusal to have her quince on feminist grounds, micro-aggressions at work, tensions between family time and attendance at Catholic mass, deportation and migrant status, and coming out. All dealt with as serious issues but still finding much humour.

The one blind spot in the series is Cuba and the Cuban regime. It is only ever seen from Lydia’s perspective as somewhere from which she was sent as a Pedro Pan teenager and as a site of loss, longing, and nostalgia for the pre-Castro period. Unlike the rest of her worldview, no further nuance or complexity is brought to bear. This is to be expected because of the long history of exile felt by Cuban Americans as a consequence of the diplomatic and political stand-off between the two countries and is no real surprise.

As a humorous and smart look at being Latino in the US that counters the prevalent and recurrent representations of Latinos as dangerous criminals, service workers, or victims, this series is both a welcome change and highly engaging.

Note: I have previously written on Quinceañera/Echo Park, LA (Glatzer and Westmoreland, 2006).  in  “My Super Sweet Fifteen: the Internationalisation of Quinceañeras in Literature and Film”, Catherine Leen and Niamh Thornton, eds and intro. This World is My Place: International Perspectives on Chicana/o Studies, New York & London: Routledge, 2013.

*Since writing this the term Latinx has moved into common usage. I don’t want to alter the title, just acknowledge change in language.

This entry was posted in Latin America on Television and tagged Latinos on TV, One Day at a Time, quinceañera. Bookmark the permalink.