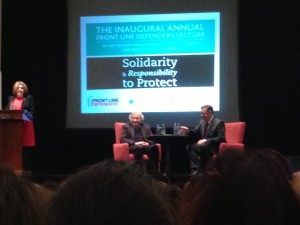 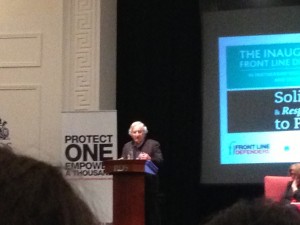 On Wednesday the 3rd of April 2013, I attended a lecture by Noam Chomsky who was invited by the Trinity College, Dublin and University College Dublin debating societies. This was the inaugural Frontline Defenders‘ lecture held in the RDS in Dublin. Chomsky, by his own admission, is not a lively speaker, but his breadth of knowledge is impressive. He started his address with examples from Colombia, El Salvador and Turkey describing the correlation between US aid and civil rights abuses. These he explained as part of the “new norm” in international intervention called Responsibility to Protect (R2P or RtoP). He described the policy in detail carefully laying out the difference between Gareth Evans’ definition, which he sees as deeply flawed against the UN version, which he favours.  All of this can be heard in the complete lecture here.

He aimed additional criticisms at “Western intellectuals” who had failed to highlight the atrocities committed in the name of the US in Latin America and elsewhere. This was where I was somewhat uncomfortable. As a Latin Americanist I have read many adroit criticisms of these actions by US and other “Western intellectuals”.  I think that the looseness of the term served rhetorical ends, if not academic accuracy.  I assume he is referring to the public intellectuals of the 1990s (that was the era he pinpointed) and the particularities of US media interests. I agree with his general criticism, that many voices heard and given the authority of space on television and radio in Western cultures over recent years have not questioned the status quo and, instead, have helped to “manufacture consent”, to borrow Chomsky’s term.

The Q&A afterwards, not featured in the online video, was where Chomsky really shone. He displayed an intelligent, wide-ranging and up-to-date knowledge of world systems, US foreign policy as well as solidarity movements. He was asked about issues such as, Guantanamo, rendition, drones, Colombian union workers, Israel, and his assessment of Barack Obama. These were responded to fluidly, and he provided a range of references to recent books and newspaper reports that supported his argument and suggested ways the listener could explore the subject further. He was aware of Ireland’s complicity in rendition and described how no Latin American country engaged in it, a reflection of the considerable change in the US sphere of influence in recent years.  On the death of the unions in the US he quoted Alan Greenspan, former US Chairman of the Federal Reserve, who said that the success of the US economy was based on fear evoked by NAFTA, which was a way of (in Chomsky’s words) “legally controlling the workforce by threatening to move to Mexico”.  As to be expected from someone who is a harsh critic of US foreign policy, he has little support for Obama, who he described as using “vacuous words behind his soaring rhetoric”.

Chomsky displayed incredible energy for his 84 years and kept the audience engaged throughout. Rather than simply being a contrarian, as he has sometimes been accused of, he has considerable skills defending the a for social solidarity that has not always been popular. In the week that Margaret Thatcher died, someone who was responsible for establishing the existing economic order, it seems fitting to remind ourselves that there are alternatives to that model and, no doubt, that’s what the 1000+ people in the auditorium were there to hear. The standing ovation at the end of the night showed their appreciation for Chomsky and the respect with which he is held. There is no doubt that there is a need for action and solidarity work. However, his allusions to many different resources reminded me that intellectual pursuits can also serve as an important means to investigate and explain what is happening at home and abroad.