As part of a project on Latin American women filmmakers (mostly directors and producers) I will be writing about Marcela Fernández Violante. She has been at the centre of Mexican filmmaking since the 1960s. She was one of the generation of first filmmakers who were educated in film school and later she became the director of the Centro Universitario de Estudios Cinematográfico as well as the first female chair of the Mexican guild of screenwriters. You can find a brief bio here from the New York Times, which describes her as “as one of Mexico’s best filmmakers”, there is more detailed information, here, here and here, in Spanish and an open source text which contextualises her work in relation to her contemporaries, here.

Despite being at the forefront of Mexican cinema, having won multiple awards her work is difficult to obtain. One of the few films that can be found is Cananea (1976), an excellent film about a mining strike which was one of the events that led up to the Mexican Revolution. I wrote about it in my book, Revolution and Rebellion in Mexican Film. Some clips and supporting material can be found on YouTube. For example, in this video there is an interview with her and several others involved in the production as well as critical reflections on the political relevance of Cananea. Here are the list of participants and the credits of the makers of this short documentary: 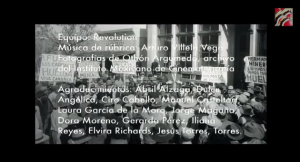 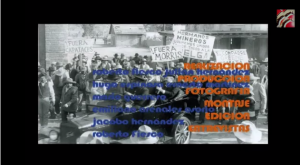 An interview can also be found with Fernández Violante on her work on Misterio (1980), a film that can be purchased in a Mexican chain retailer.

There are three brief interviews to be found, the first in English of her talking about screenwriting in Mexico, the other two are in Spanish: a news segment at a Film Festival in Tuxtla and another is a phone interview accompanied with images.

The lack of detail, analysis of her work, and even access to her films is frustrating given that she is recognised as an influential and important filmmaker. It is a zero sum game, which means that: her work is not seen; she is occasionally interviewed, albeit mostly for her assessment of the industry; and her films are not getting the attention they deserve because of lack of distribution, therefore,her work is in danger of being ignored and her role will be read as solely one of mentor and teacher, but not creator.

In this era where there is much talk of ready access to all materials and information, the inability to source a renowned filmmaker’s work is deeply frustrating. The lack of access to such films has profound implications in terms of who and what gets studied on University curricula, and who those who acts as the cultural curators of cinema can study. It’s not that we academics are lazy. We have limited resources (time, finance, energy) to constantly chase up all of those whose work is out of distribution, inaccessible and unavailable. Sometimes it’s an impossible task. The most frequent conversation I have with other Latin American cinema specialists is, “how do you access material?”, and often we are not talking about secondary sources, it’s the primary texts that are hard to find. The response is often generous in its honesty, frequently a story of navigating a way through particular conditions, and sometimes, an account of pure happenstance.

If we are only studying what is readily available internationally, transnational corporations become the gatekeepers of knowledge. Here, I want to emphasise that those films that do get international distribution deserve attention, and those who study them are not taking an easy option. It is important work. But, it is also vital that other films and filmmakers, -the hard to locate, the ones with minimal distribution, the other key figures who have not made films that the international marketplace is interested in – must be studied.

In the meantime, if anyone can suggest to me sources where I can get Fernández Violante’s films, I would love to know.