Macario – A (Transnational) Day of the Dead Film

I am currently working on a chapter on adaptation and am pulling out films that have literary origins to watch to flesh out my discussion. Given that it is the Dia de los santos difuntos [All Saints Day], which still falls within the celebratory commemorative period of Dia de los muertos [Day of the Dead], I decided to watch and write a brief reflection on Macario (Roberto Gavaldón, 1959). It was the first Mexican film to be nominated for an Oscar for best foreign film. Based on a short story, “The Third Guest” by the (probably) German-born, elusive and mysterious writer, Bruno Traven, Macario was adapted by the playwright, critic and scriptwriter, Emilio Carballido, and the director, Gavaldón. 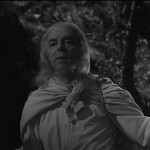 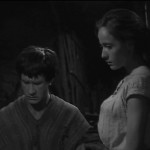 Macario and his wife (Pina Pellicer) 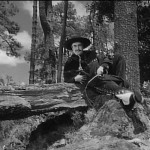 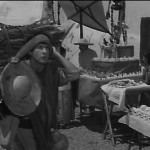 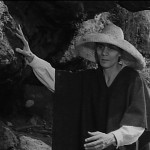 The story is set on the Day of the Dead sometime in the Seventeenth century. The eponymous hero, Macario (Ignacio López Tarso), is a poor woodcutter who has barely enough food for himself, his wife and four children. His wife helps to support the family through laundry work. On the Day of the Dead the family go into the local village to get payment for their labour and to treat the children to sugared skulls and cake with the paltry tips they get. Whilst there Macario and his family enjoy the atmosphere, but are also reminded of the inequalities between rich and poor that continue even after death. When he delivers wood to a local bakery Macario sees six turkeys being cooked for a local wealthy family and he becomes obsessed with the idea of having one full turkey all to himself. On being short-changed by one of her customers, his wife steals a turkey as payment, cooks it, and gives it to Macario as he leaves for work. Delighted he finds a spot to picnic on this feast and is interrupted three times. This first is by the devil who tries to tempt him with gold and silver. He refuses saying that it would be worthless, as, if he tries to exchange it he will be accused of robbery. The second is God, who he also refuses because he says he does not need food and is only testing him. The third is Death who says that he is starving as he has not eaten for thousands of years. Macario gives death half of the turkey. In return, Death gives him water with magical curative powers. This potent medicine can bring people back from the brink of death, if Death and higher powers are willing to let them be cured. Most can be and Macario becomes very wealthy form curing the rich, whilst he generously cures the poor in exchange for what they can afford. The Holy Inquisition gets suspicious and they investigate his case leading to an unsurprisingly unjust outcome. There are further twists to the narrative that leads the narrative in unexpected directions. 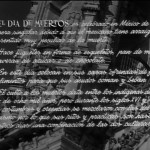 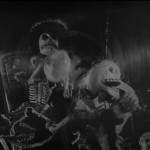 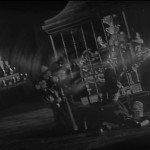 This is a remarkable film on many levels. It was shot by Gabriel Figueroa, a director of photography who started as a stills photographer, worked for a time as a cameraman and then went to the US and worked under Greg Toland before returning to Mexico and became the most influential DOP in Mexican cinema up to his final film in 1986. He also frequently returned to work in the US and elsewhere over the course of a fifty-four year career spanning 210 films.  It is shot in his characteristic style – for more read this and watch this– that is, itemphasises figures in space, which created what is sometimes suggested to be a nationalistic style of filmmaking, surrealist touches, and productively uses canted angles to create a sense of unease. Figueroa was employed on a range of films, including some of negligible worth. But this is one which has aesthetic ambition. The film was released in 1959 when the studio films were on the wane. They no longer achieved critical or commercial success. Figueroa’s aestheticised (nationalistic) style was going out of favour in Mexico at this time, but still had some appeal abroad, where it was read differently.

Another reason the film is worth considering is the source text. As I mentioned, above, the author of the film, Traven, is someone whose life story is shrouded in mystery. A pen name that is differently attributed to at least three different people, Traven published several books based in Mexico or along the US-Mexico border, the most famous of which was The Treasure of the Sierra Madre (1927) adapted into a film of the same name by John Huston in 1948. Traven’s writing and life story (stories) is characterised by radical left-wing activism and activities, not the presumed blanket conservatism of post-WWII Hollywood or late-1950s Mexican studio film. Another of his novels, La rosa blanca [The White Rose] (1929) adapted to film (1961) by the same writer-director team, was notoriously subject to the peculiarly Mexican form of censorship at the time and enlatada [canned]. That is, its release was subject to endless bureaucratic delays. This has been well covered by critics, elsewhere (see, this journalistic piece, for example). In addition, López Tarso also starred in La rosa blanca and another of the few censored Mexican films, La sombra del caudillo (Julio Bracho, 1960).

Not only is the author of the original source author of European origin, Traven was inspired by a Brothers Grimm story, “Godfather Death”, which 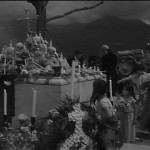 follows a similar plot, but is filled out with local Mexican details and settings and takes a different concluding turn.

The Day of the Dead element of the story is more than a touristic or foreign gaze at a local custom, because of the local creatives involved and Traven’s insider-outsider perspective it is an integral element of the story. It provides more than background to the plot, rather it is a convincing, albeit fantastical mix of social realism and fairytale elements.

It is a curious film in its production, setting, reception (inside and outside of Mexico), source material, talent, and crew, and one that merits further study as a film that was made at an interesting transitional moment in Mexican film. It is also ostensibly indisputably Mexican in its setting yet peculiarly transnational in its origins, sources, inspiration and politics.