A two-day colloquium at the University of Oxford, 9th-10th March 2012, on “third” cinema, was both stimulating and varied.

What is “third” cinema?  The inverted commas were, no doubt a deliberate acknowledgement of the difficulties involved in using the word “third”, due to its links to third worldism and the first world/third world divide that it implies, with fixed ideas of what these territories are.  Given that many countries outside of the global south have made “third” cinema films, the relationship between geography and such creative output needs to be overturned.  That being said, Latin American filmmakers and theorists devised this term, therefore taking into account its legacy on this territory is worthwhile. Fernando Solanas and Octavio Getino were originators of the term in 1969.  In their manifesto, “Towards a Third Cinema: Notes and Experiences for the Development of a Cinema of Liberations in the Third World”, they divided film as follows:

Theirs is not the only manifesto, nor is a definitive one, but the term was theirs.  More can be found here: http://thirdcinema.blueskylimit.com/thirdcinema.html, which is a good introduction to the field and provides links to manifestoes and a list of films.  This list of definitive films is what the colloquium implicitly challenged.  The legacy of “third” cinema is that it is very much still alive, not only in documentary with which it is most closely allied, but also in fiction filmmaking.

Day one began with a plenary by María Delgado talking about the films of Lucrecia Martel.  In particular she focused on her film La mujer sin cabeza/The Headless Woman (2008).  Drawing on research she is carrying out on the circulation of stars, producers, and finance in Latin American and Spain, she situated Martel in relation to recent ‘New’ Argentine cinema (1995-2002).  Delgado contends that Martel may be unlike her contemporaries and their playful use of genres, she shares their concern with the traumatic recent past (1976-83) and the shadow it is casting over Argentina. 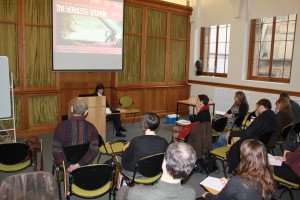 The Spanish filmmaker, who has co-produced many of Martel’s films, Pedro Almodovar’s recent films also reveal this interest in portraying the legacy of dictatorship in Spain.  In her close analysis of the film, Delgado considered how the past can be traced in a film that is ostensibly about a middle class woman who, after a car accident, tries to discover (and then maybe cover up) killing a child from a poor neighbourhood.  One of those ways is the evocative music that ties the film directly to the 1970s and early eighties and the musical preferences of those in power at the time.  Delgado also closely looked at how Martel reveals the “social schisms” through the soundscape and the visual.  Often this is achieved by both making us aware of the presence of the domestic labourers aurally, but frequently having them elided visually. Their partial visibility, curiously, makes them predominant in our consciousness of the filmic narrative and reveals the unspoken privilege of Argentine bourgeois life.  Liz Greene also spoke about the privileging of the aural in Martel, this time in relation to La ciénaga/The Swamp (2001).  She focused on how Martel disrupts the usual smooth relationship between point of view and audition.  Carrying out a close textual analysis of the opening sequence she explored how Martel creates a difficult and challenging atmosphere and how this determines our reading of these characters, their surroundings and the political context.  Their zombie-like movement, and apparent ignorance of what is going around them and of their responsibility as parents means that the past infiltrates the present in subtle, but significant ways.

Although third cinema was a transnational movement from the start and called on the creation of international solidarity networks, many filmmakers are concerned with challenging or engaging with national narratives and exploding the myths that they inspire.  To this end I spoke about Reed, México insurgente (Paul Leduc, 1970), which is a return to the films of the Mexican Revolution, but aims to destabilize traditional forms of representation, by humanizing the masses and moving away from the glamorous, panoramic shots to ground-level experiences of the conflict.  Debbie Martin, in her examination of the biopic José Martí: el ojo del canario/ José Martí: the eye of the canary (Fernando Pérez, 2010), considered the significance of representing Martí as a child.  This not only draws on the significance of children and childhood as image, metaphor and reality in cinema, but also plays this against Martí’s discursive use of childhood as a way to assert national ideals, thereby associating it with youth and futurity.  Still concerned with the national, but tracing three different locales: Cuba, Argentina and Mexico, Maria Donapetry considered woman as allegory.  Donapetry examined Lucía Humberto Solás, 1968), La historia official/The Official Story (Luis Puenzo, 1985) and Y tú mama también/And Your Mother Too (Alfonso Cuarón, 2001) and traced how women’s bodies are used as symbolic fields rather than given agency in these films.  In her paper she traced the commonalities and differences and how memory predominates as a theme. Ryan Prout also considered bodies and memory, but his concern was with aging and illness.  Bodies and their wellbeing become subject to dominant cultural discourses in María Novaro’s Las buenas hierbas (2010).  Built around the tension between the modern or Western model of medicine and the ancient, indigenous practices, Prout considered how this film could be situated within the legacy of third cinema.  Inspired by a “blended text”, An Aztec Herbal, a codex transcribed by European colonizers, the story is about an ethnobiologist who has been diagnosed with Alzheimer’s disease.  Memory, the past and its significance is the central theme of the film.  For Prout, Novaro’s privileging of the codex in the narrative tackles the homogeneising and globalizing effect of modern medicine.  He also reflected on how films that deal with aging fit in with the call to youth and a celebration of the new by the early filmmakers of third cinema.

Indigenous knowledge and rights were to the fore in Charlotte Gleghorn’s talk about indigenous filmmaking in Bolivia.  She provided a useful history and context for the filmmaking and its relationship to 4th cinema, a movement which has been described by Maori filmmakers.  Unlike other indigenous peoples in the US, Canada, Australia and New Zealand, no indigenous filmmakers in Bolivia have been to film school.  This means that their access to filmmaking is based on a different cultural and political economy.  It is often grassroots, funded by NGOs and filmmakers from non-indigenous backgrounds.  There are complex layers of power relations going on there that need to be negotiated and acknowledge and necessarily influence what is made, where and how, albeit not always in a negative way.  Gleghorn was very careful to emphasise the heterogeneity to indigenous groups, as well as the interesting role of film as testimonial voice and the significance of the collective in their filmmaking. 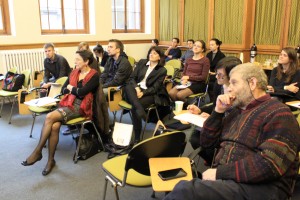 Like Delgado and Greene, Claudia Bossay considered the cinematic legacy of a traumatic past, her focus was Chile.  She examined the three part documentary, La batalla de Chile/The Battle of Chile (Patricio Guzman, 1977-80) and its legacy on contemporary Chilean cinema, or novisimo cine.  Like ‘New’ Argentine cinema, it is concerned with the trauma of dictatorship.  Where it differs is in its emphasis on collective experience and it is eschews genre for non-commercial styles.  Where Martel used music that evoked the past, the Chilean documentary filmmakers use contemporary, popular music to link the events of the past to the present and make the traumatic history more accessible.  There was a return to the popular in the consideration of unusual and mainstream approaches to negotiating authoritarian regimes in Roberta Gregoli’s discussion of Brazilian pornochanchadas, sexploitation films that were popular during the Brazilian dictatorship.  Gregoli argued that generic conventions allowed for creative and transgressive stories to be explored.  While the films are not revolutionary they do include dissenting voices.

Claire Williams considered a present-day Brazilian production that directly engaged with the past: 5 x favela agora por nós mesmos (2010).  This series of short films is a response to Cinco vezes favela (1962), a third cinema film, and other globally successful films such as Cidade de Deus/City of God (Fernando Mereilles, 2002) and Tropa de elite/Elite Squad (José Padilha, 2007), all film made by individuals who weren’t favela inhabitants.  In contrast, 5 x favela agora por nós mesmos is made by favela inhabitants. 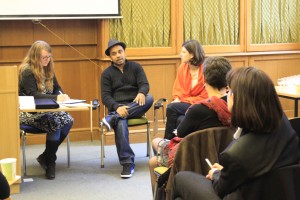 After discussing the mode of production and aesthetic choices of the filmmakers, Williams interviewed one of the filmmakers, Luciano Vidigal.  They discussed how much he was influenced by the earlier film, and considered the production, narrative, music and, most significantly his awareness of the weight of meaning, visually and aurally, that the favela carries and that he must negotiate through in the making of his film.

Two films were screened as part of the colloquium: Nicole Agranti’s Treze de maio/13th of May a film about an umbanda religious ceremony filmed in a quilombo; and Michael Chanan’s Three Short Film About Chile: 1. Homage, 2. Community, 3. Protest¸ which can be watched here: http://www.mchanan.com/.

The legacy of third cinema is long-lasting and has taken on new forms over the years, evolving as the technology, aims and conditions of filmmaking have themselves changed.  History, memory, and trauma endure as a legacy of the era in which third cinema emerged, whilst the modes of production and aesthetic choices, as delineated by the filmmakers, have continued to be subject to ongoing discussions, reflection and development.

Thank you to Nicole Agranti  for the photos