Juana in a Million and the Malinche Myth

On the 27th of October I attended Juana in a Million at the Brian Friel Theatre in Queens, that was part of the Belfast Festival.  It was an excellent one woman show and a very physical, dense and moving piece that dealt with love, loss, immigration and disenfranchisement.  The show’s website has a very concise summary here. The actor, Vicky Araico Casas, does an amazing job in performing the story and acting out other roles, including that of her mother, her Mexican friends in London, and a lascivious cook, through the use of physical gestures and vocal tics.

The play manages to capture the isolating experience of an unwilling migrant, who goes to London to escape the violence in northern Mexico which has been besieged by the brutal drug cartels.  There is much to be written about the strengths of this play in getting behind the bald headlines to the individual story of the struggle for survival of the illegal immigrant. It many ways it reminded me of Stephen Frears’ Dirty Pretty Things (2002) and its portrayal of how immigrants are exploited and under constant fear of being caught and forcibly returned home.  Yet, it was more intensely emotionally given my particular interest in Mexico and intimate nature of a one woman show.

The titular Juana tells her story in the present tense, exploiting the use of flashbacks to give us her backstory and her reasons for leaving Mexico, and flashforwards through imagined scenarios which reveal her fears when going through migration at the airport.  These flesh out the story beyond the routine abuse and mundanity of her employments, and often are the source of humour.  The repetitive nature of these jobs are turned into graceful dances that serve to heighten their banality, and also speak to the resilience of  Juana’s spirit and her ability to transcend the everyday and survive the difficulties she is confronted with. As an insight into the particular behind the public rhetoric around immigration, an account of the emotional consequences of random acts of violence, and for an appreciation of the emotional pain in leaving homeland and family behind, it is profound, beautiful and deeply affecting.  I highly recommend it.

However, there was one element that brought me out of the drama of Juana’s story and filled me with disquiet.  Early on in the play she reenacts the conquest.  This is told as a story that she remembers her mother telling her when she was a child. Much emphasis is put on the figure of  Malinche/Malintzin/Marina as a traitor. Below is a photo of a fresco by the muralist José Clemente Orozco of the conquistador Cortés with Malinche, his indigenous translator. 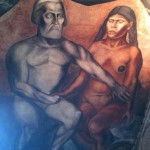 The fresco with its pessimistic tone, Cortés’ controlling posture, and the naked ambition of the pair as they rest their feet on a dead Mexican, encapsulates the tragedy of the conquest and the betrayal by Malinche of her people.  Her collusion in the downfall of the indigenous is the story that is told to Juana by her mother.  This is an oft-repeated version, and given that it is in the voice of her mother it is the story of the past passed down to the present generation in order to continue to blame Malinche for the mythic betrayal of a people.  It echoes popular versions canonised by the poet and essayist Octavio Paz in his essay “Los hijos de la Malinche” [the children of Malinche] in Laberinto de la soledad[Labyrinth of Solitude] (1950). Since its publication, and most particularly in the last thirty years, the traitor/translator figure (see Alarcón, 1994) has been critiqued and challenged by many different feminists including Alarcón (1994), Cypess Messinger (1991), Philips (1983) and Franco (1989), to name but a few.  I wrote about the myth extensively, as it was redeployed in recent novelas de la Revolución [novels of the Revolution] in Mexico (Thornton, 2006).  Cypess Messinger describes Malinche as “a historical figure who has become one of the major archetypes of Mexican and Latin American feminine imagery, a polysemous sign whose meanings, for all their ambiguity, are generally negative”. While Rachel Philips has written that,“little is really known about her.  Thus, most of the written portraits turn out on closer examination not to be portraits at all but mirrors in which are reflected the faces of the writers themselves” (1983, 98).  Jean Franco, who described Malinche as a “mythic scapegoat”, echoed this view: “The scarcity of documentation enables her to become a literary function (the ‘helper’ of the hero story), the medium-translator (traitor) of conquest and the flawed origin (mother) of a nation who would make her the symbol of the schizophrenic split between the European and the indigenous”, (1989, xix).  Therefore, Juana in a Million continues an ignoble tradition.  The fact that it is in the voice of the mother displaces it from the protagonist’s view, but, nonetheless I felt considerable disquiet at its repetition in such an unaltered form.  It was as if told by Paz himself without feminism having had any influence over its re-telling in recent years.

This entry was posted in blog and tagged Belfast Festival at Queens, José Clemente Orozco, Juana in a Million, Malinche, Mexican Immigration. Bookmark the permalink.