I recently published a post in Mediático: “Peru as a New Site of Authenticity in Cooked and Chelsea Does”. Part of me noticing this phenomenon preceded these two TV series. The first time I heard mention of the ayahuasca ceremony was in a podcast that I occasionally listen to, “You Made it Weird” , in which the comedian Pete Holmes interviews comedians and writers touching on their creative processes, their family lives, their mental wellbeing, and spiritual issues. In amongst all that, recreational drug use pops up from time to time. Linked to this and their search for higher meaning in life, in the occasional podcast the guest mentions either how they have been or would like to go to Peru and experience the Ayahuasca ceremony for the spiritual or creative experience that it would entail. Holmes is likeable and well-meaning, and also interested in discussing spiritual and psychedelic experiences, and has expressed an interest in going, just as he goes to gurus, therapists, and mystics to help him on his personal journey. I do not think that he and others are aware that they are carrying out crass spiritual tourism that can have a negative impact on those in the Global South dependent on the income it might generate. But, they should be. Primarily, I like this podcast for the discussions of the creative process. But, I have listened with unease to these conversations. These are creative individuals who are powerful influencers (in Internet marketing parlance) and are not complicating their actions with more than questions of personal wellbeing and the difficulties in knowing how to take time out. 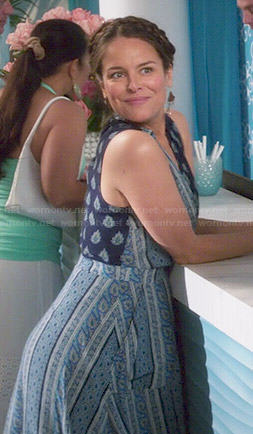 Luisa on her return from Peru

Another mention of the ayahuasca ceremony takes place in the US version of Jane the Virgin (2014-present). In series 1, Luisa Alver (Yara Martínez), after various mishaps including (*spoiler alert) falsely impregnating Jane, the death of her father, finding out her stepmother and lover is a criminal mastermind, goes to find herself in Peru and, whilst on a retreat, she partakes in an ayahuasca ceremony. This series uses a particularly ironic humour, especially in relation to Luisa, so her self-discovery is mocked as having involved little real self-revelation and is indicative of her lack of real self-awareness. What both of these instances and the further two journeys to Peru in Cooked (2016) and Chelsea Does (2016-) show (that I considered in my Mediático post) is that, currently, Peru is positioned as an exotic other where individuals from the Global North – in this case all travellers are from the US – can go to in order to seek out wholeness, spiritual awakening, and a more authentic self. Only the comedies (Jane the Virgin and Chelsea Does) suggest that this is anything but a good thing or, at least, allow for some critical space for thinking this. The recent trope of the journey to Peru provides an interesting intersection of the persistence of colonising attitudes, the potential negative impacts of the growth in spiritual tourism, and reveals how particular cultures become sites of authenticity, fixed with millennial knowledge, and assumed to be inheritors of a static cultural baggage alongside the contingent and sometimes infantilising judgements that go with this.

This entry was posted in Latin America on Television and tagged Ayahuasca, Chelsea Does, Cooked, Jane the Virgin, Mediático, Peru, Spiritual tourism, You Made it Weird. Bookmark the permalink.