Death on Film: How far can you go?

I rarely blog about non-Mexican or non-Mexican-related films except when really moved to do so. I recently saw a film whose opening sequence has haunted and disturbed me and need to write down my thoughts. Capitães de Abril [April Captains] (2000) is by the well-known Portuguese actress Maria de Medeiros. Her long career has included roles inside and outside Portugal. She has seven other directing credits to her name including three shorts and two documentaries. Taking the international awards as an indication, Capitães de Abril is her most significant and respected directorial film. As well as directing, she also stars as Antónia, in Capitães de Abril as a lecturer and journalist who has connections with an anti-fascist movement. She is married to an army captain, Manuel (Frédéric Pierrot) who (unbeknownst to her) is one of the instigators of a bloodless coup, entitled the Carnation Revolution, which overthrew the then dictator Antonio Salazar in April 1974. 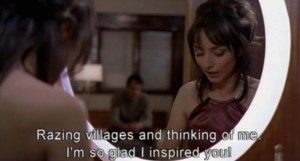 Antónia and her husband Manuel

The narrative centres on Captain Maia (Stefano Accorsi), who is one of the leaders of the coup/revolution and some characters connected to him either personally or professionally. I’m not familiar with the details of this historical moment so cannot vouch for its accuracy, but it is a film that feels like it is very respectful towards the detail of the moment and aware of the need to both entertain and draw in the audience through sympathetic characterisation and attention to intimate relations between key characters. This is history told in broad brush strokes with little nuance or ambiguities. In writing this I am not judging it for this decision, merely observing. There are plenty of films that take this approach and Capitães de Abril is a good example of these.

What disturbed me about the film was the opening sequence. Not the one that you can find described in the Wikipedia site (see below a shot taken from it), but one that appears completely at odds with what follows.

For this I will spare readers any images, but will provide some descriptions. The sequence is in black and white, giving it a heightened sense of realism, but also being simultaneously grotesque and explicit while holding back a little from the shock of showing blood in colour. It is of a series of bodies in long shot by a camera so static that, at first, it appears to be a series of photographs. We are shown footage of naked black bodies, mostly male, with bloated stomachs and genitals, missing limbs, and with swollen tongues hanging out of their mouths. Around some, there are birds (a duckling in one instance) or insects. These are evidently bodies found some hours, or, more probably days, after they were killed. The footage is shown immediately after the opening credits and before the film narrative begins. Lasting a little over 25 seconds, it is documentary footage credited as taken from the RTP Rádio Televisão Portuguesa archive. It is not clear where it was captured, but the narrative would suggest that it is from one of the colonial wars Portugal was engaged in at the time in Angola, Portuguese Guinea/Guinea Bissao and Mozambique (1961-74). I would be interested in knowing their provenance, however, here, I merely want to comment on the effect/affect they had on me and some thoughts I had on viewing them.

The primary function of the brief sequence is by way of back story. It explicitly displays the horrors of war that the soldiers had experienced (Maia, Manuel and the other instigators of the coup are veterans of these wars), and concisely tell us why they are so reluctant to kill. This determination not to shed blood again after their wartime experience is repeated several times through dialogue and speeches. Whatever its narrative efficiency, this sequence is deeply troubling in its horrific, explicit nature. It is worth noting that the killers not the dead are given the privileged place of victimhood of the atrocities of war, a point that is resonant with multiple readings that I have no space for here. Look at what they were made to do, is one of the integral messages of the sequence.

The use of actual footage of death, of bodies strewn about and dismembered for narrative coherence seems to me to be both exploitative and ethically dubious. The usual intention of such footage is to report. The images or footage supplement the reporter’s account, thereby providing a visual shorthand and creating greater impact. At times, the image or sequence has primary importance and the words provide context or information (photographic theory, in particular, is full of discussions of this inter-relationship between image and language). How explicit the images are varies according to governmental policy, the perpetrator, propaganda, censorship, and attention to sensibilities of the victims and their families. Susan Sontag has written very cogently on this in Regarding the Pain of Others (London & New York: Penguin, 2003). Rarely would footage this graphic be shown in current television reportage in the UK and Ireland (the two I’m most familiar with), but can be found in photographic form in some graphic tabloids in Spain and Mexico or, some spaces online. My lack of knowledge of the Portuguese context means that I cannot tell where, how or with what frequency such imagery is used. Again, I’d welcome feedback on this.

As a film which was shown in Un certain regard at the Cannes film festival, funded by Ibermedia (an Iberian & Latin American funding body), had Italian producers, backing from the French television channel Canal+, amongst others, this can be read as a transnational film and, therefore, the opening images as intended to be circulated amongst a (probably arthouse) international audience. Consequently, the lack of information, subtitles, intertitles or credit for these dead bodies is not about what it invokes in a knowing Portuguese audience, but what they suggest to this transnational audience. What are we to make of the use of this undignified awful death as a way of achieving narrative efficiency? For me, a person well used to watching death on screen, they were shocking and upsetting images. I felt that the director was exploiting these black (race is significant here) bodies to serve her narrative. The tenor of this sequence sets a much darker tone than that of the remainder of the film. It is my conviction that Medeiros went too far. The use of these bodies is exploitative and obscene (I say neither of these lightly) and I cannot see the justification. Her shorthand is nasty and irresponsible. She has used the horror of war and these unnamed others’ deaths in a way that goes too far.