A brief introduction to Jean Franco 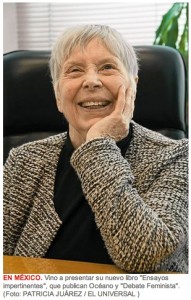 At the Latin American Studies Association last year in Washington I met Jean Franco. Born in Manchester, she was a pioneering scholar who has become one of the foremost cultural theorists in Latin American Studies. She has written on multiple literary forms (poetry, short story, testimonio, novels, etc), television, journalistic writing and multiple other forms that fall under the broad title of Latin American culture. She laid the groundwork for English-language studies of women’s literature in Mexico. The fact that most of her books are still in print is testimony to their relevance. I turn to her work, repeatedly. What prompted this post was an interview with her by a Mexican media outlet accompanied by a brief biography. Nearly 90, She is still writing books, travelling, and actively engaging with other scholars. In her most recent book, Cruel Modernity, she considers the conditions that led to cruelty and torture being used in Latin America in the last 80 years. She is currently professor emerita at Columbia University, New York. Lively, friendly, and interested, she is also very good company.

*As an addendum to this post I want to add a profile of Franco by Elena Poniatowska. It is a speech given in 2014 to launch a translation of a book of essays and to celebrate her work: https://regeneracion.mx/ensayos-impertinentes-de-jean-franco-por-elena-poniatowska/ .