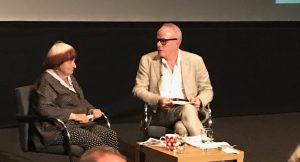 On Friday 13th July, I had the privilege of seeing Agnès Varda being interviewed by Hans Ulrich Obrist (HUO). The interview is now available online. They are both seasoned interviewer/interviewees and this was evident in the interaction. She is delightful, highly articulate, and gave fascinating responses to the questions. He was warm, careful, and attentive in his questions. In advance, I was curious as to how HUO, a big name in curatorship, would be with Varda, an artist and filmmaker of considerable reputation and skill. My concern was that he would be egotistical, whereas he was a generous interviewer, who facilitated Varda throughout. Later the same evening, I heard her interviewed on BBC4’s Front Row, where she proved herself a more difficult interviewee. In that case, the presenter, John Wilson, is soliciting  more news-ish questions, such as Varda’s attitude to the MeToo campaign. Through no fault of Wilson’s, because of the format and the need for brevity, it was a choppier piece. At FACT, HUO was soliciting a more wide-ranging conversation and could allow her space to respond, prompting her for clarification and following up, where needed. Watch the video for Varda, but also to get a sense of HUO’s skilled interviewing techniques.